Those who visit Carnegie Hall or the Frick Collection in New York city come face to face with the fortunes of two of the richest men that the United States has ever produced. 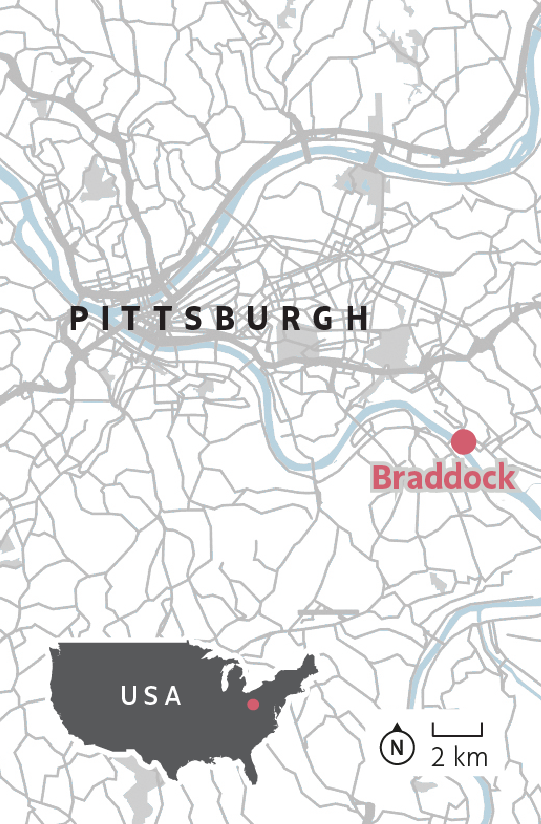 This is the legacy of two of the most hated figures of the US trade union movement. These two men were also the protagonists of a bloody episode of class struggle in the Pittsburgh area of Pennsylvania.

On July 6, 1892, steel industrialist Andrew Carnegie (1835-1919) and his then-executive Henry Frick (1849-1919) sent an armed militia against striking workers at the Carnegie Steel Company. The episode became known as the Battle of Homestead.

The violence against the striking workers resulted in ten deaths. It would be 44 years before local unions reorganized again.

In that interval, marked by the depletion of labor movements in the United States, the country saw an intense concentration of income.

That's when Carnegie and Frick gained steel-based fortunes that turned Pittsburgh into the world's largest steel-producing region until the 1970s.

Over time, Pittsburgh has given way to hundreds of service and technology companies. In most of them, the workers have never seen a union at the forefront.

But the first Carnegie steel mill, Edgar Thomson, now part of USS Steel, has been functioning since 1872 in the neighboring district of Braddock.

It currently employs about 550 workers, a fraction of what Pittsburgh steel companies used to employ.

In just over half a century, the city saw its population shrink in half, to 302,000 people pushing neighborhoods like Braddock in deep decline.

"My great grandfather, my grandfather, and my father worked at this steel mill. The whole area was full of working class families. With the mill's decline, that's over," said Isaac Bunn, 49, owner of the last house standing near Edgar Thomson.

Isaac Bunn, owner of the last house near the Edgar Thomson steel mill

The area is not much different from those in other decaying industrial states of the so-called rust belt, like Michigan or regions of Ohio, Indiana, Iowa or Wisconsin.

In 2016, the people who voted for Donald Trump wanted an America that could once again be "great again."

"Trump promises to recover sectors like ours, and that's where the vote comes in. Import tariffs help our industry and also the workers," said John Gornall, president of the Braddock Steelworkers' Union.

When wandering around, it's almost difficult to remember that it's still the wealthiest country in the world.

An abandoned house in Braddock, Pennsylvania; the city fell into decay as the local industrial sector shrunk

Without residents, homes have been overtaken by brushwood in Braddock, Pennsylvania

An abandoned house in Braddock, Pennsylvania; the city fell into decay as the local industrial sector shrunk 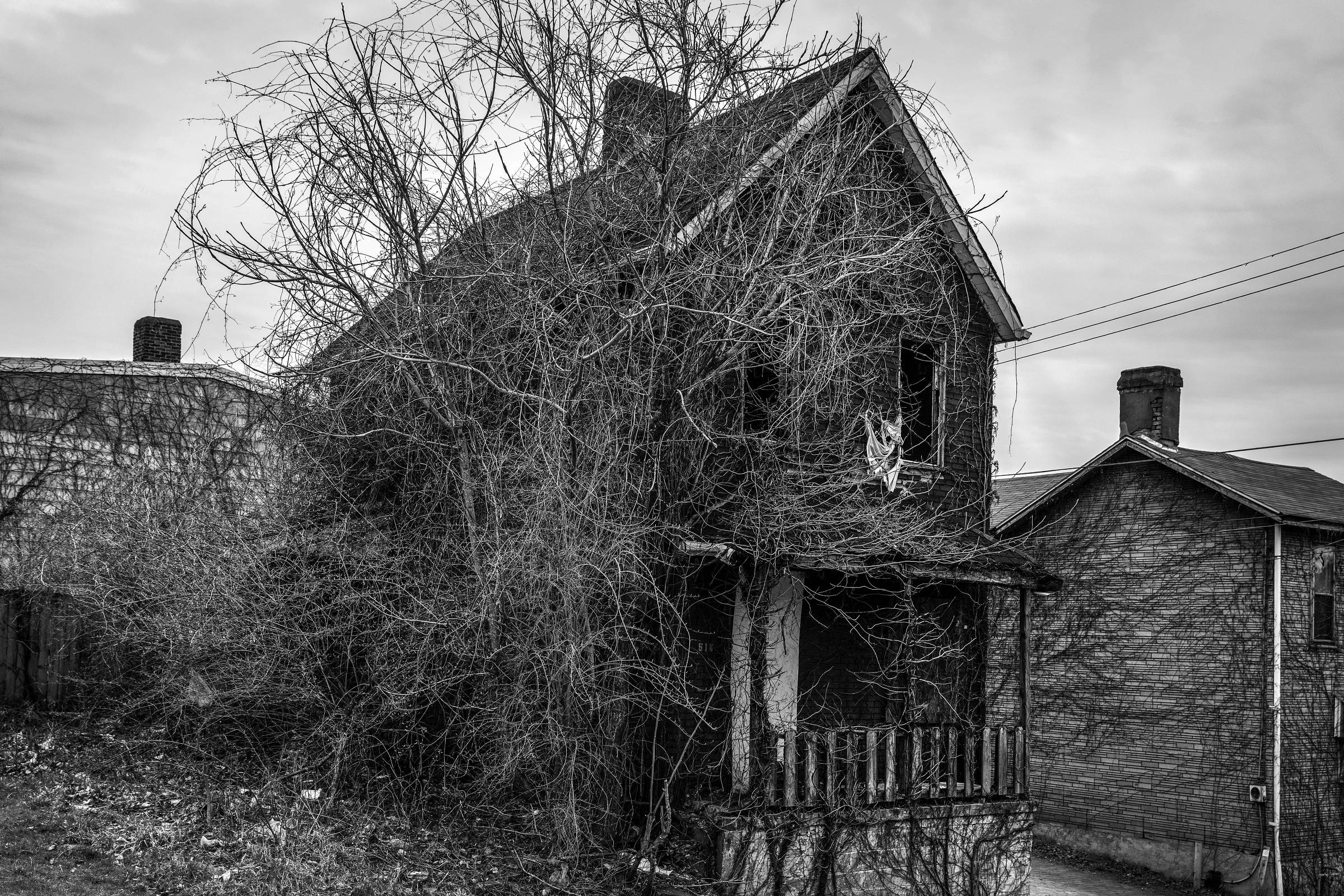 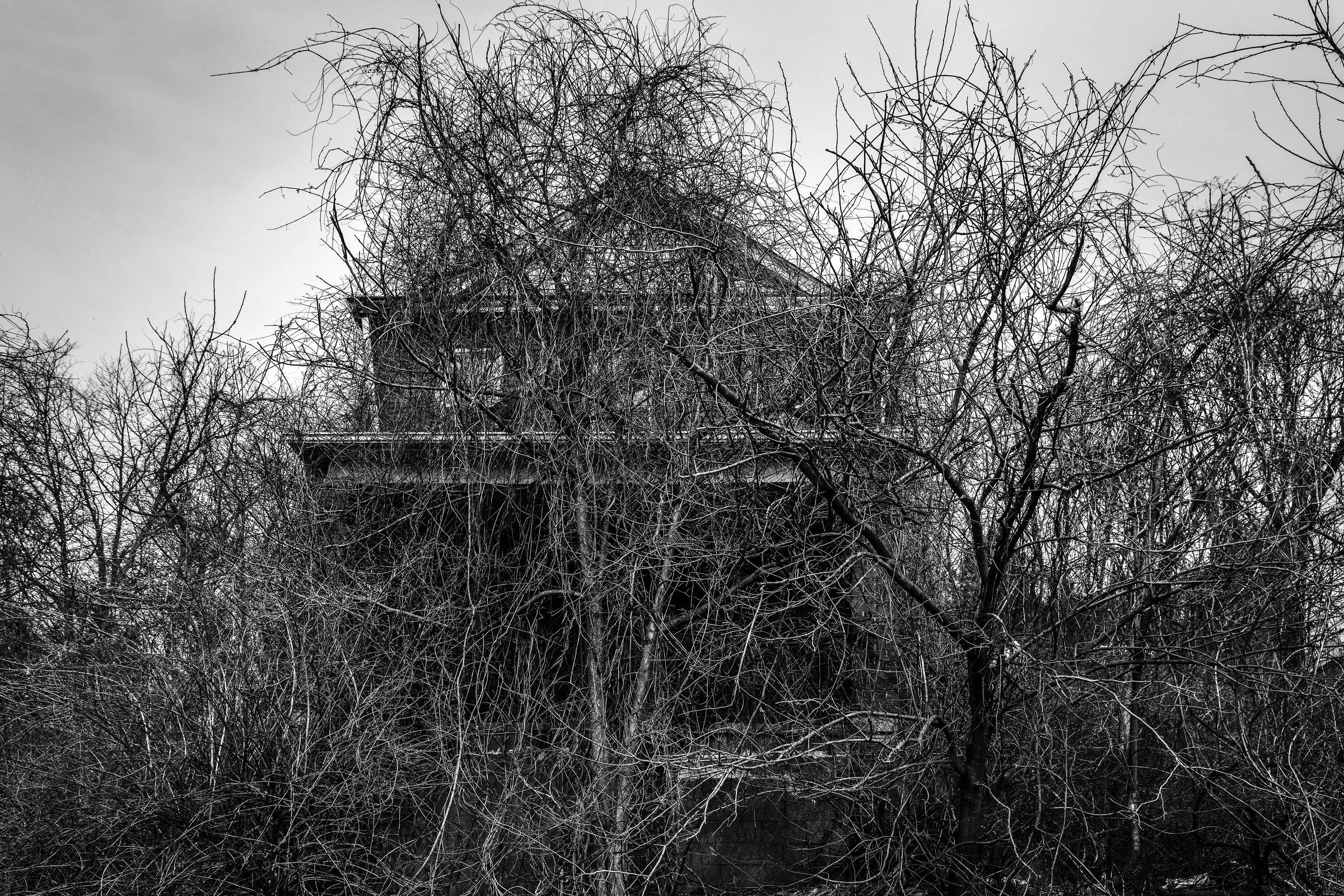 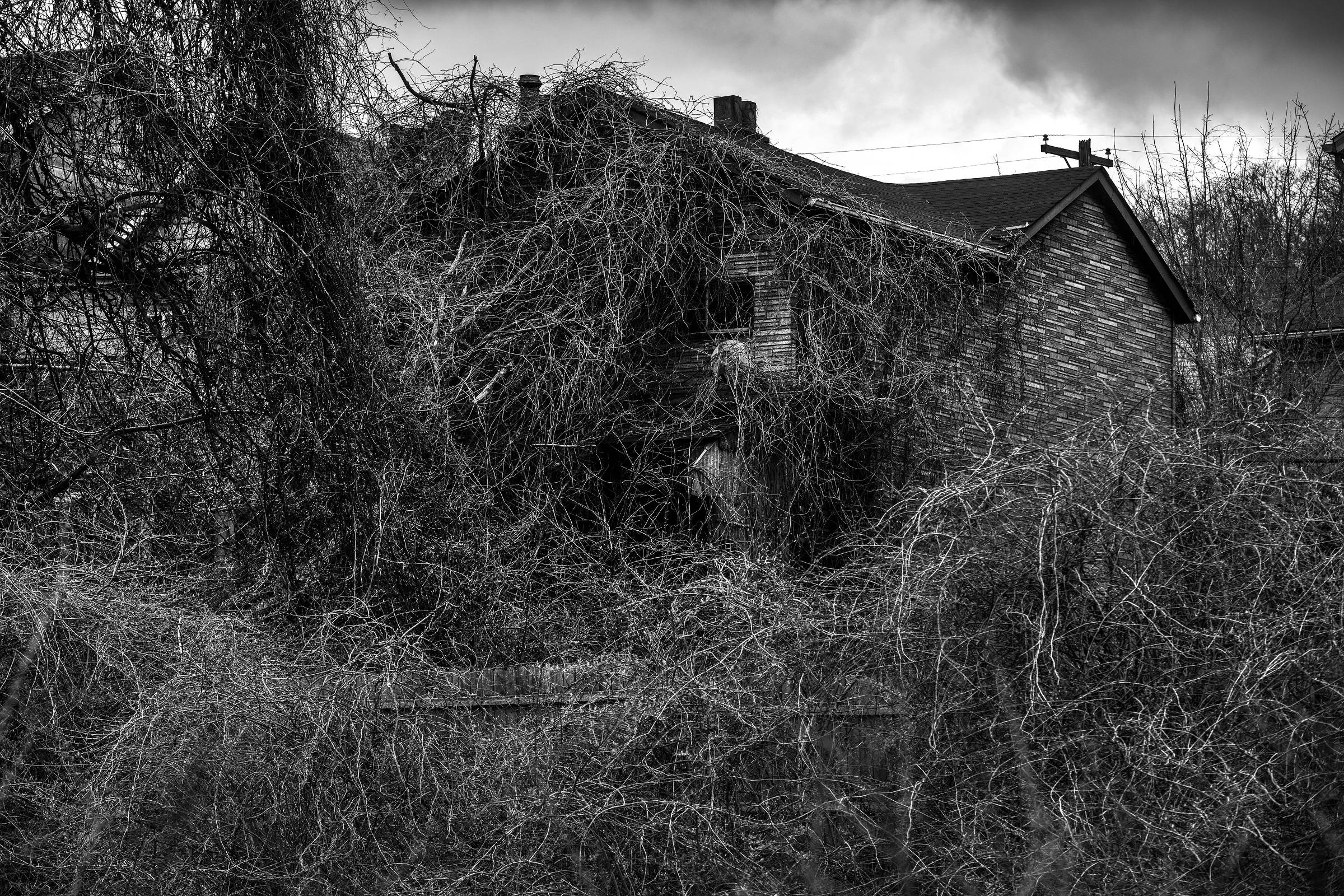 What Braddock and these industrial states have in common with the rest of the United States is the enduring stagnation of labor income and rising inequality.

While the middle class shrank and took on massive debt, the wealth gap between American workers and the so-called super-rich widened.

In no other country in the world has there been such a shocking reversal of income distribution as in the US in recent decades.

This reverse began in the 1980s and accelerated in the 1990s, coinciding with the strong deregulation of the financial market in the country that would generate, years later, the financial crisis of 2008-2009.

Today, the wealthiest 1% in the US captures the equivalent of all the income of the poorer half. The poorest half saw its share of total income fall by almost half to 12.5%.

While incomes among the "super-rich" have flourished, incomes of the poorer half have been stagnate for almost 40 years.

432 Park Avenue in Manhattan has US$ 30 million apartments in the tallest residential building in the world; below, a staircase nicknamed "social climber" is a new US$ 200 million structure in New York

On the other hand, the middle class (the 40% "middle" between the rich and the poor) had an increase in their income of just over 40%, which impoverished them relative to the wealthiest strata, according to the Global Inequality Report.

The Pew Research Center, a Washington think tank, estimates that in this period, the total number of Americans in middle class families (with an average annual income of about US$ 78,500) shrunk from 60% to 50% and that a good part of those fell out of it became impoverished.

Researcher Rakesh Kochhar of Pew Research cites the following reasons for income stagnation the poorest and the middle class loss of income share: declining unions, which saw the number of affiliates dwindle in half since the 1980s; shrinkage of the industrial sector; globalization that has led companies to move business to other countries; and technology and automation.

Over the past 20 years, the market share dominated by leading companies in their industries has increased by 75%. This not only reduced business competition but also workers' wages.

For economist Branko Milanovic, one of the leading experts on the subject today, the term "inequality" is beginning to become almost obsolete in the face of income distribution in the US and most countries, especially in the West.

"The most appropriate word today is polarization between the poor and the rich," Milanovic said.

"And it is common for people to ask themselves what the program is for the middle classes. The fact is that there is no coherent one, and the result we have is the so-called protest vote."

The inequality and fear of the middle classes in losing status, he said, would increasingly determine the electorate's choices. And they have almost always been pouring into proposals and applications in the populist camp.

Of the ten American states where the middle class still predominates, bringing together more than 60% of the population, eight voted for Trump in 2016, including Pennsylvania. In these states, the decline of the middle class has been acute.

Braddock's resident Lou Berry, 59, for example, says he frustrated after working a lifetime. While working at his last job at a large hospital in Pittsburgh, he accumulated debt because of a health treatment.

Berry says that he has a place to live today because he inherited his house from his mother.

"In 1979, when there were still many union jobs, I worked for Westinghouse Electric and earned US$ 8 an hour. I could buy whatever I wanted," Berry said.

"Thirty-five years later, my starting salary at this hospital was US$ 8.50. Many times I had to choose between medicine and food."

Not far from his house, on another street with run-down residences, retired police officer Harrold Reichert, 67, tells similar stories.

"Years ago, we had more money, and it seems that I made more, and it lasted more. For me, it is surprising that so many people have been putting up with it all this time," he said.

A used clothes and objects bazaar in Braddock; abandoned shopping mall in Pennsylvania

The visible decline in several relevant states and the data on income concentration appear to be contradictory in a country with a series of positive news on the surface such as the relatively rapid exit from the 2008-2009 crisis, economic growth and an unemployment rate below 4%.

First, the debt of American households is getting higher very quickly, revealing a chronic inability to pay bills without borrowing, despite low unemployment.

Household debt totals a record US$ 13.5 trillion, almost US$ 1 trillion (more than half of Brazil's GDP) above 2008, when the debt crisis, especially real estate, exploded.

According to the US federal government, about 40% of adults in the country do not have any cash for emergencies greater than US$ 400.

Second, the GDP growth of the last ten years (25%) is equivalent to a little more than half of the GPD growth registered between 1991 and 2001.

Both cycles were supported by increases in productivity, but this only lead to a drastic boost in income for senior executives. Workers saw little gain.

General view of Braddock, with EdgarThomson steel mill at front

Since the mid-1970s, US productivity has jumped 77%, but the average hourly labor value in all strata increased by only 12%.

Taking only the federal minimum wage as a benchmark, it could be worth US$ 20 an hour today (not US$ 7.25) if it had accompanied productivity growth.

In Congress, Democrats are pushing for the federal minimum wage to reach US$ 15 by 2024. But there is a lot of resistance to the proposal, both from corporations and Republicans.

For Kachhar of the Pew Research Center, in addition to the political impacts, the poor's income stagnation has already become a relevant macroeconomic concern for the medium and long term.

"One of the consequences of rising inequality is that it tends to generate slower growth in the future when the overall economic demand falls because of the concentrated income flowing to an ever-smaller number of people", the economist said.

Two other points highlighted in the Global Inequality Report are crucial about the nature of US income concentration and its implications for growth.

Income stagnation among the poorest 50% is not a consequence of an aging population. On the contrary, income grows more among elders, revealing that young people are, in practice, losing income over time.

Closed stores on the main street in Braddock, Pennsylvania

At the other end of the spectrum, among the richest, while gains in the 1980s and 1990s were still mostly based on earned income, starting in the 2000s, the jump was mainly in capital gains.

They are incomes in business and financial investments that do not necessarily impact the production of physical goods and employment and that contribute to accelerating the deepening of inequality.

Inequality experts all agree that progressive taxation on income and capital gains is one of the best ways to address inequality.

But since the 1960s, US taxation has been less and less progressive, and it became even more favorable to the super-rich with the tax cuts that Trump adopted when he became president.

"Trump was elected with a campaign promise that he would make the economy work for the bottom 50 percent, but what he has done goes against their interests. Tax cuts for the rich are just more evidence that inequality in the US will continue to rise," said Lucas Chancel, coordinator of the Global Inequality Report.